I have been wanting to design this page for a very long for the simple reason I love village cooking. It is so simple yet delicious and healthy. It is the nativity feel that this topic has that has pulled me towards trying out dishes that has existed for so many generations among our families.

I am sure you can notice a vast difference from tiny everyday problems ranging from headaches to eye problems to chronic illness, some are even life threatening like heart disease to diabetes to high blood pressure. Even the average life expectancy has been altered.

You can argue that medical science has improved so much and people live for so many years more than our ancestors. I don't disagree with that but their permanent companion after a certain age are medications in various sizes and colours.

Have we ever noticed our grandparents take so many medications???

So what is their secret... simple healthy eating...

There is no processed foods, sugar laden cereals, ready made meals, polished rice or excessive white sugars / flour / salt and they have immense loads of physical work.

Millets are the key ingredients in village cooking along with country vegetables cooked in a mild sauce. Nobody skipped a meal but they had specific dishes for certain times of the  day taking into account the current season and availability of ingredients. 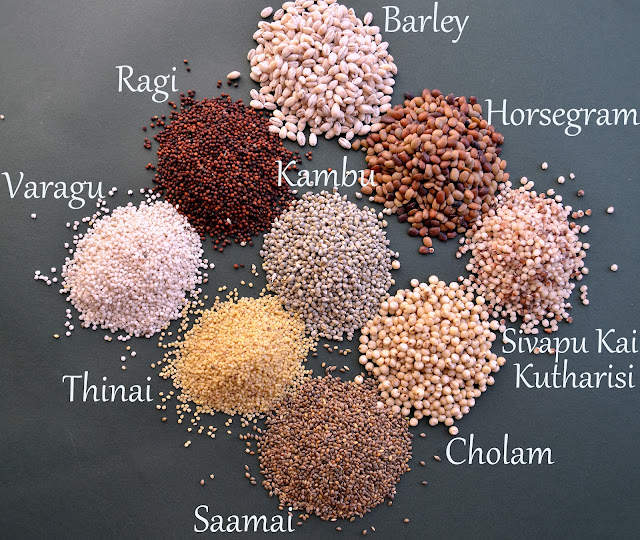 Millets are known as "Small Grains" or "Siru Thaaniyangal" in Tamil. Millets have been important food staples in human history particularly in arid regions of Asia and Africa.They are small seeded grasses and thrive well in dry arid climatic conditions. Evolutionary origin points towards West Africa and has been cultivated for more than 10,000 years in East Asia.

India is one of the largest producers of millets but mostly they are used as bird seed in the west. In India, millets form the staple source of nutrition for the common man who form the major section of Indian population.

The advantages of cultivation of millets holds the key to successful farming without harming the water content of the land or the financial capacity of the farmer. Millet varieties can withstand dry and arid climatic conditions without a losing its nutrients. The storage life span of these grains are triple than rice and wheat as they are not easily attacked by insects or pests.

So for a country like India where the population is growing by the second , it would be a wise decision to switch back to traditional farming methods and varieties which would help is sustained growth of the farmer. This would help keep agriculture as an occupation for nearly 75% of the population and prevent immigration of the rural population to the cities in search of jobs.


This would ultimately help in increasing the growth sector helping the economy of India. Also the deep rooted traditional and cultural connections between these grains, their consumption and cultivation to our ancestoral history can be preserved and handed over safely to the future generations.


There are quite a few varieties of millets which are quite popular and has been around for centuries....

Teff also falls under the millet family when it comes to commercial distribution and consumption of the grain.

The varieties range from rotis to sweet porridge to steamed dumplings to semisolid mash which is usually eaten along with lentil curry. Do not under estimate the millet grains just because it does not have the grandiose of the present counterparts [rice and wheat ].

They are bursting with nutrition , vitamins and minerals far more superior to rice and wheat.

It is time we take pride on our ancient agricultural practices and grains that were once prevalent in our kitchens. As responsible citizens we owe this to our nation and farmers...

Please go through the following links to know more about millets...

Please use common word for ingredients so everyone can enjoy your recipes. Just write in the bracket the common Hindi or English words. Your website is very nice.

Thanks for the info.. I really appreciate ur effort. I already used thenai, varagarisi in my cooking. like to use all the nine
though.

good information, but would be nice if you could also give us the English names
geetha

wow.. super... India had only top of production of whole millet, every one make business for these foods is get big future.

Really good page, I love Indian food, very true that our grandparents and great grandparents are much healthier without having to use medicines like we use now, not that I use any :)

I have learnt that Indian food is the best if we make it the way we used to years ago.

Great work:) please do favour of tamil or telugu name of teff?

Thank you very much Reva! I was very informative.I have switched to millets food and it has been more than 3 month,now I notice a significant difference in my health and my families health.In this culture they have looked at each and every aspect of life(including food) with such a depth unlike any other culture on this planet that can enhance this human life to its fullest potential.

Omg! So interesting! Recently I've been very keen to learn millet recipes! I'm gathering as many as I can. Thank you so much for the post! Soon I'll try them :)

Omg! So intersting! Recently I've been very keen in learning millet recipes. I'm gathering as many as I can. Soon I'll try them. Thank you so much for the post!