Rice and its varieties 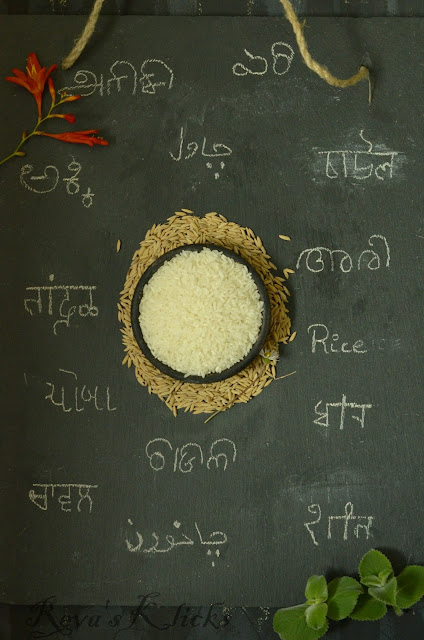 RICE - This tiny grain needs no introduction. Rice is the most widely consumed cereal grain by a large part of human population all over the world. Its culinary history and origin of the Rice crop itself goes back thousands of years and we will get there step by step ..

Rice is a seed of the grass species Oryza sativa [Asian rice] which is the domesticed variety of wild grass Oryza rufipogon nearly 14,000 thousand years ago. . Three subspecies are wildly cultivated across the world - Indica [tropical regions]/Japonica [subtropical and temperate regions of east Africa] and Glaberrima [West African regions].

Now let us start with the "Rice as a crop"...
Rice plant is a monocot meaning the seed has only one cotyledon. Other examples of Monocotyledonous plants are palms, orchids and lillies. In most areas rice is grown as an annual plant, requires copious amounts of water and is labour intensive. Research states that the parent crop belongs to Asia and parts of Africa.

Have we ever thought about how this tiny seed was named rice? From where was this term derived? I must say the derivation process has been complicated but Wikipedia gives a somewhat simpler version of this derivation
The word "RICE" derives from the french word "ris" which is turn comes from "Riso", in trun from the Latin word "Oriza", which in turn comes from Greek "Oruza". The origin of the greek word is unclear but the interesting history bit comes here ..
There are 2 theories, one is that Greek word "Oruza" is derived from the Tamil word "Arisi" and the other one is that this Greek word is derived from Proto-Dravidian word "Warinci" and ultimately traced to Indo-Aryan subsequently to Dravidian language. 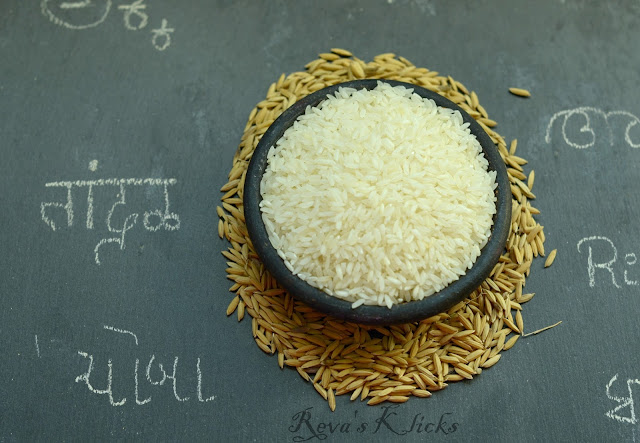 Nutritional value of Rice ..
We all know that rice grain contains carbs, protein, fats, fibre, vitamins and minerals but the percentage of these components differs. Here I have given the basic calculation as white and brown rice varieties are the most commonly used ones .. Reference from here

It is customary to wash rice before cooking but please don't over do it. Rising the rice [even 2 or 3 times] results in water-soluble nutrients including starch, protein, vitamins, minerals and fats. The best way to go about it is soaking the rice [depending upon the rice variety] and rinsing it once. Dont throw away the water - you can use it to make rasam .. YES, RASAM or water your herb garden.

Cooking rice in traditional way [i.e] boiling rice in water and draining the water is the best way to cook rice.What exactly happens to the water that the rice is being cooked in? The ordinary plain water gets transformed into an awesome liquid gold called "Kanji".. 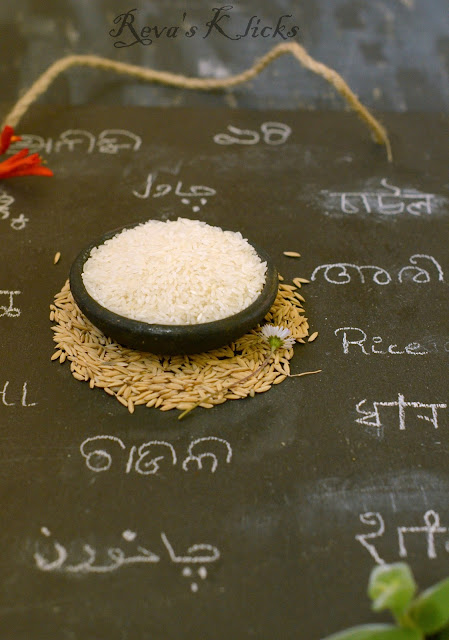 ASIA - There are 2 theories regarding the domesticaton and spread of domesticated rice varieties ..

A. Based on archeological evidence it is believed that rice was domesticated in the Yangtze ricer valley in China.  At around 3rd millennium BC there was a rapid spread across mainland china , South east Asia,Western India and Nepal.

B.Cultivation of rice may have started in Mesopotamia and Persia by 2nd century BC.

AFRICA - African rice has been cultivated for 3500 years. African rice [Oryza glaberrima] is cultivated as both field crop and paddy crop.There is also an indegenious weedy rice variety Oryza barthi being cultivated during the flood season.There is little evidence to show the presence of Asian rice variety in Africa. Al-Zuhri mentions that during the 12th century rice was staple among the abyssinians living along the Nile river. Eviednce pint to the spread of rice to the eastern African coast during the 14th century. However, the names of rice is Swahili language link it more to India.

Between 1500 and 800 BC, Oryza glaberrima propagated from its original centre, the Niger River delta, and extended to Senegal. However, it never developed far from its original region. Its cultivation even declined in favour of the Asian species, which was introduced to East Africa early in the common era and spread westward. African rice helped Africa conquer its famine of 1203.

MIDDLE EAST - Rice was grown in region of southern Iraq. In Palestine rice is grown in and around Jordan valley. Rice is also grown Saudi Arabia at Al Hasa Oasis and in Yemen.

EUROPE - Rice was imported to the classical world from Egypt and beyond. Rice was thought to have brought to Greece by the returning soldiers of Alexander The Great's army from the expeditions into the eastern part of the world. Asiatic rice was brought into the Iberian Peninsula by the Moorsat around 10th century spreading to Majorca and Valencia. Rice cultivation spread to Sicily during the 9th century , spreading to Italy and France and then to other parts at around 15th century.In Russia short grain starchy rice known as "Kuban rice" is grown.

CARIBBEAN & LATIN AMERICA - Rice was brought into this part of the world by thet European colonisers. Asiatic rice was brought into Mexico by Spanish colonisers and Portugese and African slaves introduced it to Brazil at around the same time. The rice and bean dishes which were a staple in West Africa were carried forward by the "African slaves" where ever they were taken to work.

More about the varieties of Rice ..