Hello friends,
I am so happy and excited to announce that I would be hosting "A Worldly Epicurean's Delight" famously know to everyone in the food blogging world as "A.W.E.D" by DK of Chef in you. I can't thank her enough for two main reasons....

First,  for letting me host this event. When I first approached her to let me guest host her event, she readily agreed even though I was very new to blogging then.

Second, I didn't know anything about the "logo" or how to create one.....when I asked her, she guided me how to do one.....She even offered to do the logo herself if I am having trouble with it. Thanks DK for being so patient and kind ....


The next most important person I want to thank is Priya of Priya's Easy n Tasty Recipes . She doesn't need an introduction in this blogging world. She was one of the first two people to comment on my posts [the other person being Aipi of US Masala] which was so encouraging and motivating.

I didn't know how to link the logo on the sidebar of the blog [I am a complete zero when it comes to these technical details] ....I asked Priya for help....She was very prompt to reply with all the info. I can't thank her enough for her kindness and her helping nature.... I am humbled and bow down to U people to say "THANK YOU"

British Cuisine basically means "unfussy dishes made with quality local ingredients, matched with simple sauces to accentuate flavours , rather than disguise it". British food has national and regional varieties including English, Irish and Welsh....

Age old British Cuisine was developed based what grew in the highly fertile soils and animal breeding which led to meat and savoury herb stewing techniques. For many centuries "plain and robust" food remained the mainstay of the British diet....


Modern British cooking fully emerged around 1970's and is becoming increasing popular.  With the infusion of Indian, Mediteranean, French, Italian, Chinese, Thai, African and Japanese flavours, this cuisine is taking a modern twist....

Not to mention Chefs like Gordon Ramsay, Nigella Lawson, Delia Smith and Jamie Oliver have made this cuisine more popular in recent times.....

The influence of various cuisines have led to a new genre of flavours and dishes.... BBC has even mentioned "Chicken Tikka Masala" as the "Britain's True National Dish"... talk about globalisation.....

Sunday Roast: Roast beef, lamb, pork or chicken served along with an assortment of vegetables and gravy.
Afternoon Tea: This is so popular that there is a famous notion of "Drop everything for the tea"....usually tea is served with scones, jam, clotted cream, biscuits, simple sponge cakes or sandwiches...

Pies and Pasties: Pies date back to the middle ages...
Cheese : Usually made from cow's milk....Usually they are given the names of the place of production. eg. "Cheddar Cheese" from the village of cheddar, tangy Cheshire, salty Sage Derby, Red Leicester, creamy Double Gloucester, pungent Lincolnshire and sweet Wensleydale are some of the varieties. Cheddar and the rich, blue-veined Stilton have both been called the "King of English Cheeses".


Fusion Cuisine: Influence of Indian and Chinese cuisine is wide spread, thought to have started during the British Raj which has given rise to Mulligatawny soup, Chicken tikka masala, Chicken Tikka Sandwiches and Pizzas, Chicken Madras ...!!!!! London is now the heart of International cuisine featuring some of the most tasteful and delicious dishes from around the world.

Now for the event: By this time all of you would be familiar with the rules but this is to just to let all the new and  non-bloggers know about the rules. 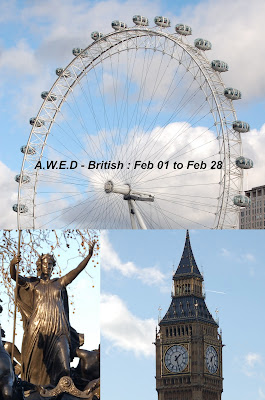 6.Email me to kaarasaaram@yahoo.co.uk [or] revathi.madhanagopal@gmail.com with A.W.E.D-British in the subject line from Feb 01 to Feb 28. with the following details.

6.Non bloggers please send your entries to the above email with the above mentioned details.

The round up will be in the first week of March [unless an emergency situation arises].

The logo is this last pic, guys. Please give all your support to make this event a big success. I am hoping to see some interesting dishes.....so start cooking....

Scribbled by Reva
Posted by Reva at 15:29

Email ThisBlogThis!Share to TwitterShare to FacebookShare to Pinterest
Labels: Events

Happy hosting dearest revathi and congrats on ur award!!! You truly deserve it, the reason which is obvious to any one who has viewed ur blog..;) Im sending my entries real soon..

Happy Hosting Reva...
Thanks for the so very good intro on the land... this makes me all geared up to try something for this event.. May be will also get an idea from my sis who lives there.. Great event... Love the pics
http://krithiskitchen.blogspot.com

nice event
ALL THE BEST!!!

Happy hosting Reva, will definitely send my entries soon, thanks a ton for ur kind words, am honoured..

Sounds very interesting and like you I am not at all techy but that does not diminish my curiosity and eagerness to attempt this A.W.E.D event :)The pictures are pretty and so is the introduction on various cuisines :) Good Luck and Keep It Up!!!

Another award for u Madam :)

Lovely recipes you have an award in my blog visit and grab your award waiting 4 u....

Happy hosting!!!.. nice different event.. I'm not aware of British cuisine at all.. Thank you so much for the beautiful introduction!.. will try to send some recipes..

Happy Hosting!
Your logo is very pretty! and I am looking forward to send some recipes soon :-)

Hi Reva I have posted my 2 recipes for British event check out my blog and let me know that u got my mails or not.
Thanks
Rekha.

reva,
just now sent u my cheesy egg toast recipe.
kindly chk it and say whether u recieved it or not

reva,
I have linked to dk also now.
Just now sent both the entries to ur both mail.plz chk it out and reply.thanks

Just sent you an entry Reva.

pls confirm once you received