"Victoria Sponge Cake" is one of the most easiest of cakes u can ever whip up. This was named after Queen Victoria of England [1819-1901]. The Duchess of Bedford, Anna was one of the queen's "ladies in waiting" [someone like a friend u chat with and munch a cake at the same time]. 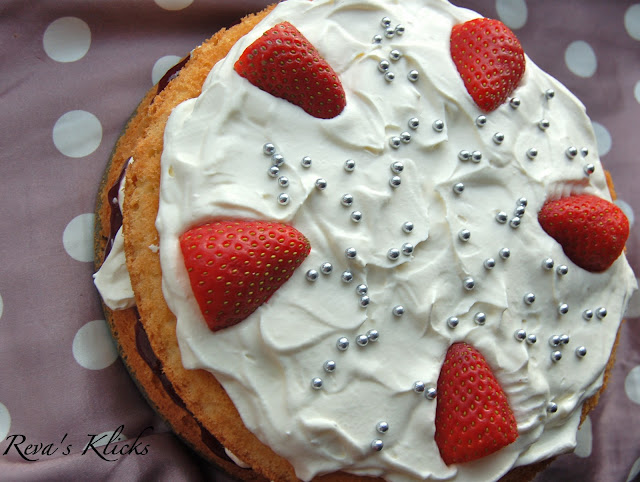 Anna usually spent her summers in a place called Leicester [like we have summer vacations in Ooty or Kodai] and had her friends for tea which was served around 4 pm in the afternoon along with an assortment of small cakes, bread sandwiches and sweets.

She carried on practicing this even after returning to London where this "Afternoon Tea" fever spread like wild fire. It went to such an extent that Queen sent out cards to invite friends and dressed up in formal gowns.... 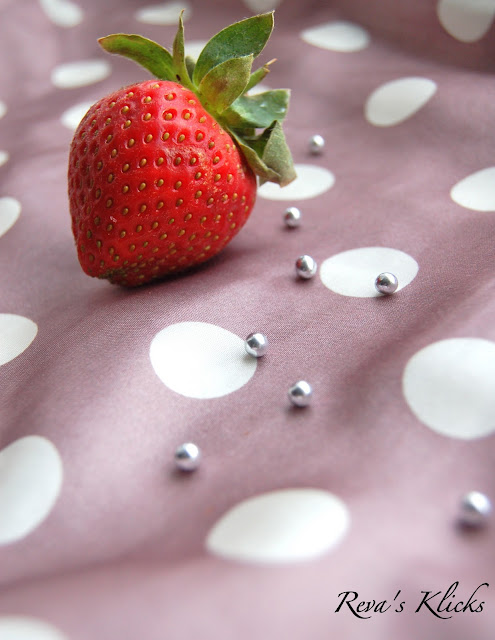 Instead of making small cakes, a large one was made and named after the Queen. That is how this wonderful cake came into existence.

Wether the idea was Anna's or the Queen's or the multiple cooks who worked in the palace kitchen to come with such a lovely recipe.... all I want to say is a big "Thankyou" to whoever it is for this tasty cake...... 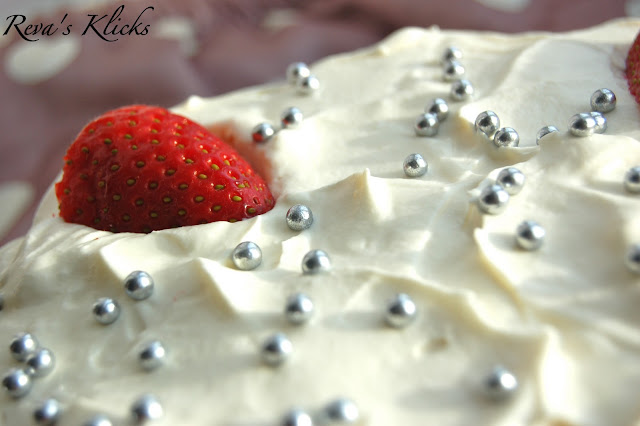 Coming to the cake itself, as I said it is the most easiest of cakes and ingredients are very simple. I got the recipe from the cookbook "Frame by Frame-Baking" that I brought last year.

What did I do: I didn't change much except I reduced the amount of sugar [the original recipe calls for 175gms]and added condensed milk to the whipped cream. Instead of dusting the finished cake with icing sugar, I layered it with whipped cream on top and finished of by arranging fresh strawberries and a sprinkle of sugar balls. 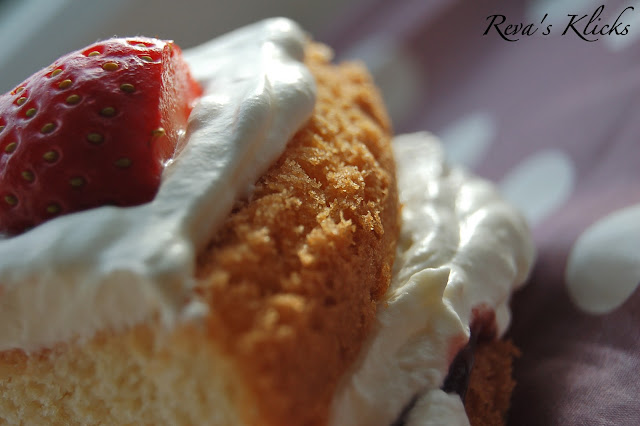 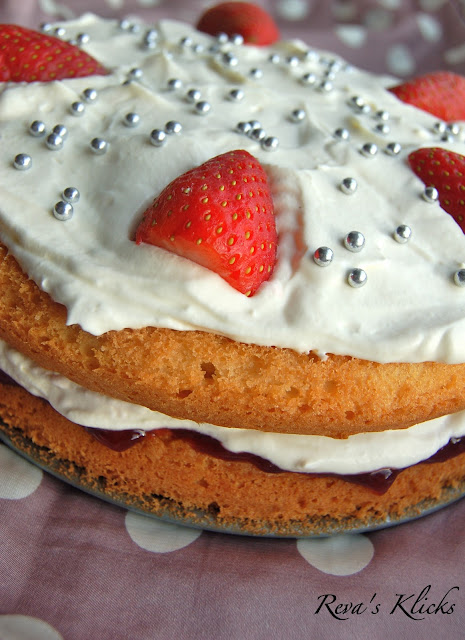 1.Preheat oven to 180 degrees/350 degrees/ Gas mark 4. Grease and line two 20cm /8 inch cake tins.
2. Sift flour and baking powder together.
3.Add the butter, sugar and eggs. Beat well until smooth.
4.Divide this mix equally into the two prepared cake tins and smooth the surfaces.
5.Bake for 25-30 minutes until well risen and golden brown.
6.Remove from oven. Cool in the tins for 5 minutes. Remove from the tins, turn onto a wire rack to cool completely. 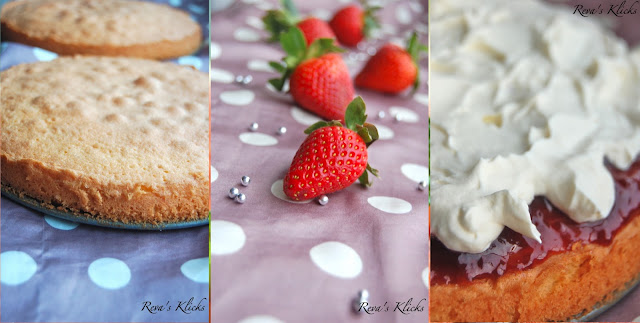 To assemble the filling:
1.Whip the double cream until whipped cream consistency. Add the condensed milk and mix well.
2.Cut the strawberries either into halves or slices. 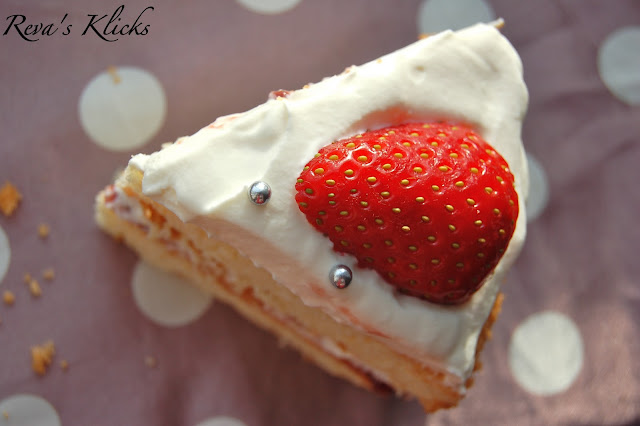 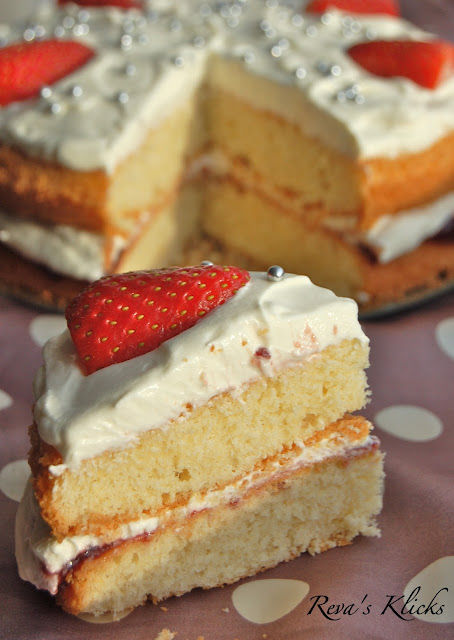 Serve on the day of making as the cream nor the strawberries doesn't hold good the next day.

Note: I like the taste of condensed milk with the cream. U can use icing sugar instead or just dust icing sugar on top of the cake, the classical way. If u r planning to dust with icing sugar, place the base of the cakes on the wire rack and not the top bubbled surface as u will have marks on the surface.
U can arrange the strawberries in between the 2 cakes - just make sure to slice the strawberries into thin slices. 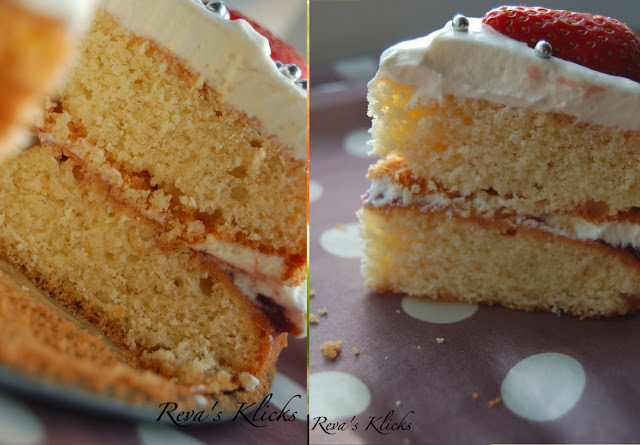 Variations: Just take out 1-2 tbsp of the flour and add cocoa powder to make a chocolate sponge. Can add 1-2 tsp of fresh coffee brew along with coffee essence for a mocha effect. Try adding colour to the basic cake mix along with vanilla essence and top with a layer of nuts. Adjust the cream and garnish accordingly.....

Sending this to A.W.E.D-British- event by DK   guest hosted by me... 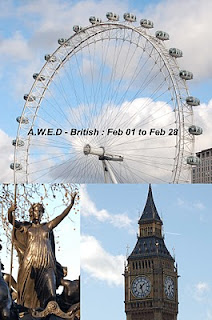 That is an awesome cake...Luv'd all the clicks on yummy cake..

Hi Reva,
Thanks for visiting my blog and ur sweet comment.. This cake looks really tempting .. beautiful frosting, the sugar balls give an elegant touch..

Reva,
Magnificent creation!!!
cake is so beautiful.. and thanks to Anna!Her afternoon tea has indirectly helped us too :D

wow !!! wonderful and pretty cake..very colorful and awesome clicks !!!
Thxs for visiting and following my blog! following u too..

Simply gorgeous and the cake looks so perfect to even taste it. lovely clicks.

A little bit of everything said...

the cake looks amazing. i'd love a slice right now.

thanks for the idea of mixing whipped cream with condensed milk. I'll try it next time I whipping some heavy cream.

Have a wonderful day

Pretty cake I am sure it taste as good it looks.

Pass it on to me .Looks awesome

Delicious!
Nice to meet you :)

The cakes looks fabulous. I bet it would have tasted as good as it looks :)

Looks so tempting and nice clicks...

Wow.. thats perfect :) love the beautiful cake and beautiful clicks.. will surely try this :)
thanks a lot for stopping by my blog and following me :)
am following u too :)

the victoria sponge cake looks awesome and the pics are just great!

That's one delectable treat and that too with strawberries, ah! Beautiful pictures, too.

Lovely post Reva - The strawberry on top is waiting to be bitten into -
Also stop by my blog dear and collect a couple of things waiting for you - congrats :)

cake looks so spongy and yumm

simple recipe but the look is surely royal...deserves the name

I love the story behind this cake..looks awfully tempting too!

Wonderful! The sugar balls are interesting! (They look like mercury drops seen in the Chemistry lab)...Awesome cake!

I love whipped cream frostings on cakes . Cake, cream and strawberries are always a winning combination. I'm drooling .
Thanks for stopping by my blog. Glad to follow you.