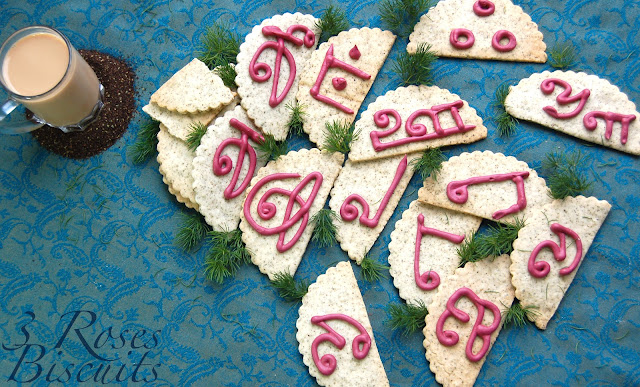 My childhood favourite and is still is "Milk Bikis"... they had an absolutely delicious flavour especially when dunked in milk and eaten immediately. There are times when I used to eat them soaked in just plain water. I am sure most of us have tasted these yummy biscuits... 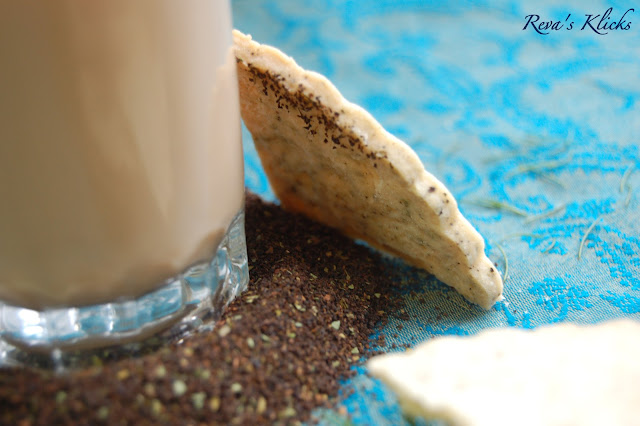 That is the magic of certain flavours sticking on to our memory ...

Each time we have the same dish or something that resembles the original flavour, we are instantly transported to that time period.... even though our teen age or childhood seems like a million years ago.. 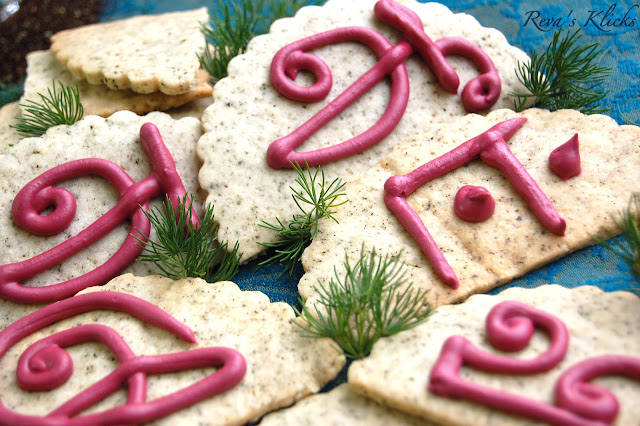 Coming to the recipe, the original recipe [which is from a cookie book] had green tea as its main ingredient which unfortunately I did not have in hand. So, green tea powder was substituted for my own favourite "3 Roses Tea -Natural Care"... The flavour and the aroma of this particular blend is wonderfully refreshing and tastes delicious. 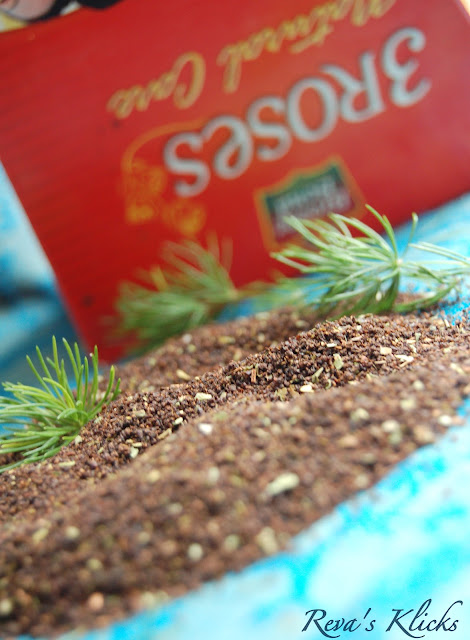 As I finished with the cookies and started with the icing, my daughter became inquisitive of what I was upto... and she clearly wanted to contribute something....

I had just started to teach her to write Tamil alphabets, so the icing on the biscuits had to be the alphabets, just to bring in some "fun in food".... My daughter was full of smiles and clearly excited.

"Semmozhiyaana Tamizh mozhiyaam..." Tamil [my mother tongue] is one of the oldest surviving languages in the world.

It has been described as "the only language of contemporary India which is recognizably continuous with a classical past" and having "one of the richest literatures in the world" and is said to have existed for over 2000 years.

The two earliest manuscripts from India acknowledged by UNESCO were in Tamil. 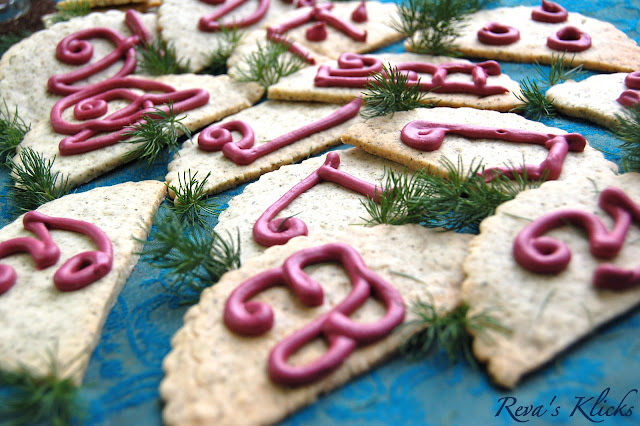 It is a Dravidian language and is the official in Tamil Nadu, SriLanka, Singapore etc. It was declared as "Classical Language"by the Govt. of India in 2004. The earliest epigraphic rock edicts and stones date back to  century BC. Tamil has the most ancient non-sanskritised Indian literature.

Tamil means "sweetness" or "sweet sound" but it also means" One's own speech"...

The alphabets on these biscuits are known as "Uyir Ezhuthukkal" and they are 13 in number.  "Uyir means Life" and "Ezhuthukkal means Alphabets". They are the basis of Tamil words along with 18 other letters known as "Mei Ezhuthukkal"in which "Mei means body". 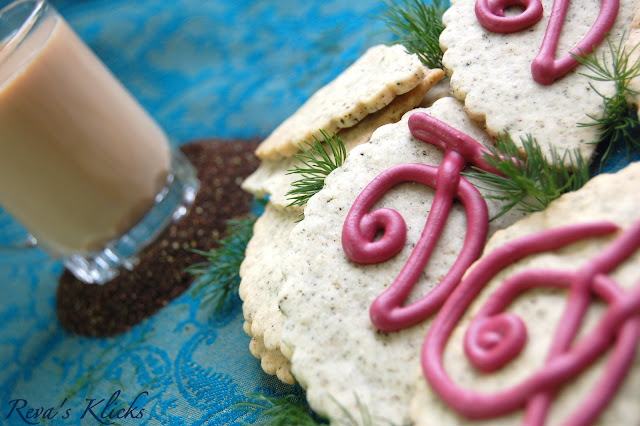 The flavour of the biscuits is not so sweet with a bitter flavour coming as after-taste. The mild icing compliments the biscuits. You can have these ones without the icing... 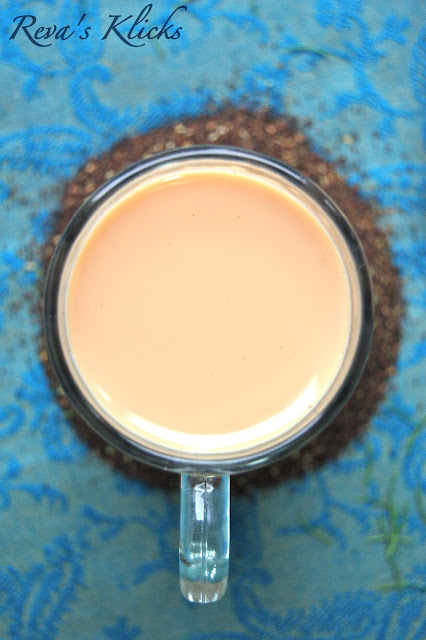 1.Beat the butter, sugar, vanilla extract and egg in a small bowl until light and fluffy.
2.Stir in the flours , tea and ground almonds. 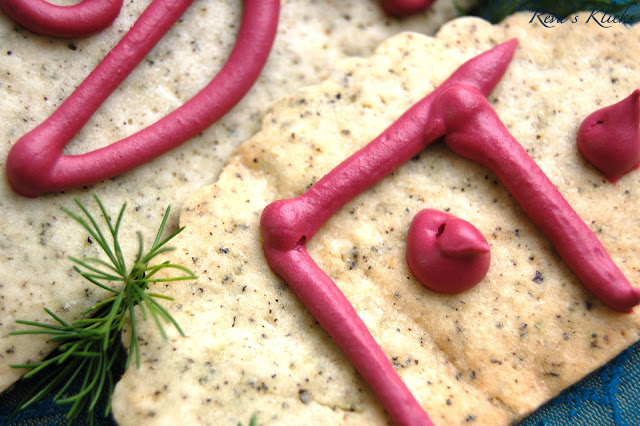 3.Knead the dough on a floured surface until smooth. Roll the dough between two baking parchment sheets until 5 mm thick.
4.Cover and refrigerate for 30 minutes.
5.Preheat the oven to 180 degrees C/160 degrees C fan assisted. Grease oven trays and line with baking sheet.
6.Using a cookie cutter around 8 cms in diameter cut out large rounds from the dough.
7.Cut the round cookies into halves [like hemispheres] and place them on the baking sheets about 2 cms apart.
8.Bake for about 15 minutes. Remove from the oven and cool completely on wire racks. 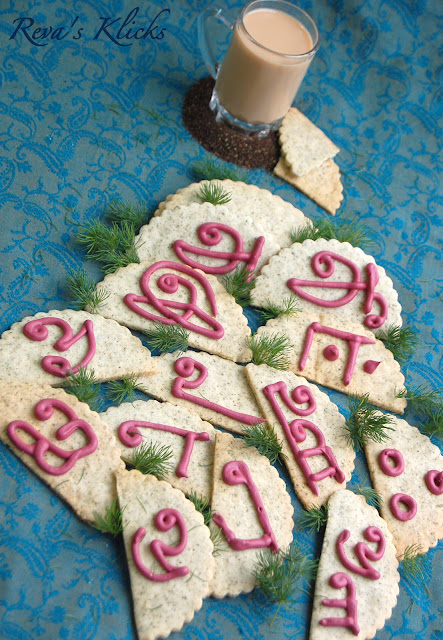 9.Mix the icing sugar, vanilla extract, food colouring. Add water little by little to make a smooth paste which is loose enough to fall in a line.
10.Spoon into the pipping bag and secure the end tightly. Snip off the end of the piping bag so that the opening is around 2 mm in size.
11.Pipe designs on the biscuits of your choice and enjoy. 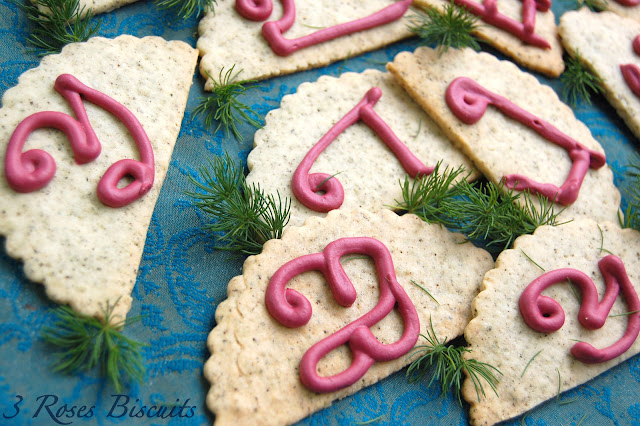 Note: Be careful when when baking the cookies. They can brown very easily if left in the oven for a longer time.You can keep the biscuits stored in air tight containers for upto a week without the icing. Do the icing on the day of serving. The original recipe has green teas its ingredient, so feel free to use green tea leaves if available.

The original recipe had a fondant layer on the biscuit on which the icing was done. Please do include the fondant layer if you want to....

Cookie with tea is new to me. But yours' looks awesome with all decoration.no doubt ur daughter was full of smiles.. Am sure it would taste awesome too. :)

Beautiful idea..love these cookies. Salute to ur tamizh patru :)

very nice post .. luks yummy.. love the explanation that u have given for the language.

Very interesting post. Tamil Uyir Ezhuthukkal on cookies is very innovative. I enjoyed reading your post. Milk biki's are my fav too. I thought nothing tasted better with milk than those. It had a unique taste and flavor.God knows how many packs of those I must have dunked into milk.

wow never heard of these biscuits...very yummy...and wow...u do an awesome job on teaching the letters..wow wat better way a shild can learn her letters! u rock dear!

Hats off to u dear,as a tamil lover those tamil fonts impressed me lot...Thanks for writing in tamil...cute biscuits.

Its looking gr8. nice to c our tamil fonts on them . Superb idea :) Hats off !

I love the icing -super ungal tamil fonts! That is a different cookie!

They are super cute!

Me too a very big fan of 'Britannia Milk Bikis'

these are so cute, flavourful and ultimate biscuits..excellent one sp the icing.

tea flavour in biscuits is quite interesting..loved ur post

Superb and also wonderful way to teach a child .I am sure your daughter would have enjoyed it